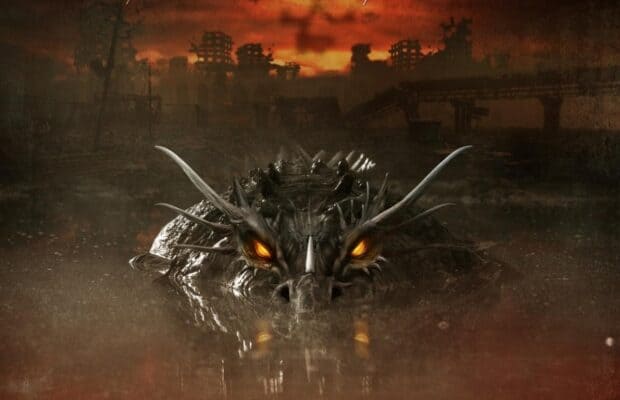 Metal legends FLOTSAM AND JETSAM have returned with their fourteenth studio album, the blistering 12 track Blood In The Water, available today via AFM Records. “It’s definitely a highlight of my career releasing a record that sounds like this,” says guitarist Michael Gilbert. “I’ve heard it described as relentless. I can’t think of a better description that represents ‘Blood In The Water.’ We hope to make you all slaves to the slaughter.” Mixed and mastered by Jacob Habsen (U.D.O., Volbeat, Amaranthe, Powerwolf), Blood In The Water is unarguably the Arizona-based quintet’s finest, hardest-hitting release to date.

Fans and critics alike have reacted with fervor to Blood In The Water’s  “Burn The Sky,” “Brace for Impact” and the album’s title track, the latter of which sees the return of Flotzilla, the creature that graced the group’s 1986 debut Doomsday for the Deceiver, in an updated and even more menacing form throughout its lyric video. “We’re very excited about the fan and press response so far,” says drummer Ken K Mary. “We have seen amazing reviews, such as the album of the month for June and the #1 rated album in Aardschok magazine, one of Europe’s most influential metal publications. We’ve had a great fan response to the singles, and excellent radio and video exposure as well. Whenever you put an album out, you are never quite sure how it will be received. We put a great deal of effort into this album, so we’re very happy to see this response!”

Blood In The Water is available via all digital platforms. Physical copies and special editions are available at https://shop.afm-records.de/new/2120/flotsam-and-jetsam-blood-in-the-water-ltd-boxset-incl.-t-shirt-sizes-l-xxl, Blood In The Water track listing: 1-Blood in the Water 2-Burn the Sky 3-Brace for Impact 4-A Place to Die 5-Walls 6-Cry for the Dead 7-Wicked Hour 8-Too Many Lives 9-Dragon 10-Re-aggression 11-Undone 12-Seven Seconds ‘Til The End Of The World “The group has worn the mark of consistency over the last decade in particular and on this third single off what will be their 14th studio record. ‘Brace for Impact’ is a classic styled thrasher with a shout-along chorus that should please any old school FLOTSAM AND JETSAM fans as well as any and all newcomers alike.” – Loudwire

FLOTSAM lineup has never been stronger. A.K. keeps bringing the magic every album and tour, and oddly seems to be getting better and better as time goes on. He’s backed by the incredibly talented, exceptionally brilliant guitar duo of co-founder Michael Gilbert and Steve Conley, the powerful, precise, and lightning-fast engine of drummer Ken Mary (whose Hall Of Fame resume includes over five million albums sold with artists such as Alice Cooper, House of Lords and Accept), and the ‘fresh blood’ and extraordinary technical skills and prowess of bassist Bill Bodily.”– Blabbermouth“Ken Mary behind the kit and Bill Bodily on the bass form the backbone that every track is built around. ‘Walls’ is a perfect example, with the galloping double-bass drum work and the persistent grind of the bass guitar…The guitar-work from Michael Gilbert and Steve Conley is just amazing. ‘Cry for the Dead’ is a showcase on this album, from the easy, single-note melodies to the ripping hooks in throughout, the song runs the gamut of what a great guitar player can bring to a rock track.” – Herald-Whig“…FLOTSAM AND JETSAM are retaining their legacy as one of the few bands that kept the multiple riffs in one song rule and matured with time while staying relevant.” – New NoiseFLOTSAM AND JETSAM is: Eric “AK” Knutson – vocals Steve Conley – guitar Michael Gilbert – guitar Bill Bodily – bass Ken K Mary – drums FLOTSAM AND JETSAM online:www.flotstildeath.comwww.facebook.com/flotsamandjetsam.officialwww.instagram.com/flotsamandjetsamofficialhttps://twitter.com/flotztildeath