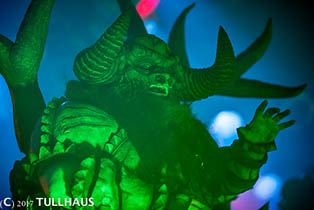 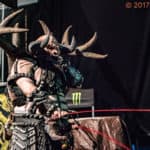 GWAR, the interplanetary, demented toxic mutants from another planet in a universe far, far away, that also sometimes use music to spread their message of impending doom and sin, are landing on Planet Earth in the contaminated, debauched confines of Pop’s Nightclub on our earthly calendar date of November 3rd. GWAR have been visiting our toilet bowl of a planet since approximately 1984, covering earthlings in GWAR gore, damaging ear drums and providing grotesque spectacles to thousands of GWAR adherents for over three human decades. During this time, they’ve released 14 full-length releases, including our calendar’s The Blood Gods (Metal Blade Records) which will be available to earthlings on October 20th.  I was fortunate enough to receive a transmission from Berserker Blothar. He deigned my human form worthy of his attention and consideration. This is what followed:

Is there any hope left for humankind?

Hell no! Mankind is doomed. GWAR is here to help them pull the trigger and end their long suicide. Shit or get off the pot; there are many more deserving beings who are waiting to take your place at the top of the food chain in this world. All signs are that humanity is so in love with death that GWAR can barely keep up anymore. There is almost nothing in this world or any other to match the selfish, myopic, arrogance of mankind. We will do the universe a favor and help you snuff yourselves out of existence.

Will Gwar continue when you’re all dead and gone? Gene Simmons and Paul Stanley have said there will still be a KISS when they retire.

We aren’t planning on dying anytime soon, but you can see how that is working out…we do die, again and again. I don’t doubt that KISS will keep going until the end of time, but in all truth, I don’t expect the same to be true for GWAR. I know there is talk of the band lasting a thousand years, but I expect GWAR will go into the night when the current members reach their ending point. Something tells me it is a lot harder being GWAR than being KISS. WE can’t find good slaves anymore…it’s not just.

Will there be a new Donald Trump character to sacrifice in the saw?

Donald Trump has been showing up to all of our concerts, and he has been dying at the hands of GWAR each and every night, and then miraculously coming back to life the next day! What the Hell? So, yes, apparently, Trump is much more powerful than we imagined. He is like a wart that keeps coming back after you have it removed. We expect to see him and his whole family on this tour!!

Are you Anti-War or Anti-GWAR?

What is Gwar’s health care plan?

Well, on the new album there is a song called “El Presidente”, and it is basically about what would happen if GWAR became the leaders of the free world. It would no longer be the free world first of all! We would immediately put that fat faced clown Kim Jong-UN from North Korea in charge of everything. We would change the name of the country to West Korea. Then we would try unsuccessfully to get a single payer healthcare bill through Congress for the rest of our term.  Even GWAR can’t fight the insurance companies. Too powerful!!

Can you shock an audience anymore?

Of course, WE can shock the audience. We are the most electrifying rock band in the history of the world. We just douse the crowd of heat metal plebeians in literally 100 gallons of bodily fluids and then drop a live electrical line into the middle of the crowd. Blamo! Fried plebe. In fact, it is getting harder and harder for GWAR to shock audiences. We struggle to compete with the absolute horror that humans see every day on the news. That is a theme of the new record (The Blood Gods), GWAR struggling to compete with the human’s desire for self-destruction. But I think we still pack a punch. People are not used to seeing a rock band that reaches from the stage and touches them directly. And we will touch them directly! All of them! In the no-no spots where their bathing suit covers!

Yes. As stale as old shitty molded bread. Metal was once spooky blues played by insufferable white dudes who managed to create something original out of their twisted imaginations, but things have gone to shit. The drummers have gotten better, the singers have gotten worse. There are bands that just play breakdowns the whole time. I hate that. And there is still far too much seriousness and hubris in the genre. We are dedicated to destroying all of that! If music doesn’t make you feel like killing your father and pimping out your mother with a delirious shit-eating grin on your face, then it has failed its purpose.

How does Gwar celebrate Halloween?

We dress up just like everybody else. We go door to door ringing doorbells and demanding panties and candy and drugs and booze. Last year Beefcake was a fairy princess, and I was Joey Greco from Cheaters.

Who is the average Gwar Hab?

The average Hab is an Adderall addicted, unemployed sex worker with a colostomy bag, living in the basement of their parents’ house.

What current band has appropriated your concept the most?

Ghoul!! We love those guys, but geesh! In fact, we are solidly on board with those guys, but bands like Slipknot certainly took some ideas from us. Really, even Dethklok, as amazing as it was, that was basically a GWAR-like concept.

Have you patented your recipe for Gwar blood?

NO! it is just human blood! We can’t patent that. We just spill it. Wait, I am hearing from our legal team that we DO in fact have a patent pending on the existence of the human race, which includes human blood, so, I stand corrected!

For the St. Louis/Sauget show, will we be drenched in hot GWAR gore or cold GWAR gore?

You will be drenched in whatever steaming load is left over after we hose down those whores at the two nearby strip clubs. So, yes. Hot load!

How do you clean your gear after a show? You can’t send it out to the cleaners, right?

No, we do send it out to the cleaners. We have it sent to Kim Jong-Un who hand washes everything and sends it back via giant carrier pigeon.

Do you see a new generation of Gwar fans at your shows?

Yes, we are. And it warms our hearts to see young fans flipping out over GWAR. Warped Tour was great for us. We got to expose ourselves to a whole new generation of fans that will be scarred forever, and are now doomed to spend their lives with colostomy bags living in their parents’ basement.

At your last St. Louis show during Warp Tour, you said you have heard about the troubles in St. Louis. What is your plan to heal our city?

We will bring healing to your troubled nation by eliminating the visual markers of racial difference that have led to so much trouble amongst you. We will kill all policemen, and municipal servants such as toll booth attendants, and replace them with trained chimpanzees carrying monkey AIDS. Then we will use our ultimate weapon, the Bile Driver, to turn you all BLUE!! So, don’t schedule a job interview after a GWAR show, you WILL regret it!

You’re playing Sauget, Illinois outside of St. Louis. Sauget is known for strippers, biker meth, and chemical production. Will Sauget become your new favorite hangout or be immortalized in a new song?

Ah yes! Sauget, the town that put the super fun in Superfund. The Sauget ballet!! A town so toxic it was literally founded with the name Monsanto! All the things you mentioned above are what makes Sauget one of our favorite places to play. Where else can you buy meth from a biker, get blown by an emotionally devastated teenaged stripper, load up on PCB’s and go fishing for three headed fish in Dead Creek?—Doug Tull

View photos of the Gwar show at Pop’s https://www.sonicnation.net/photos/