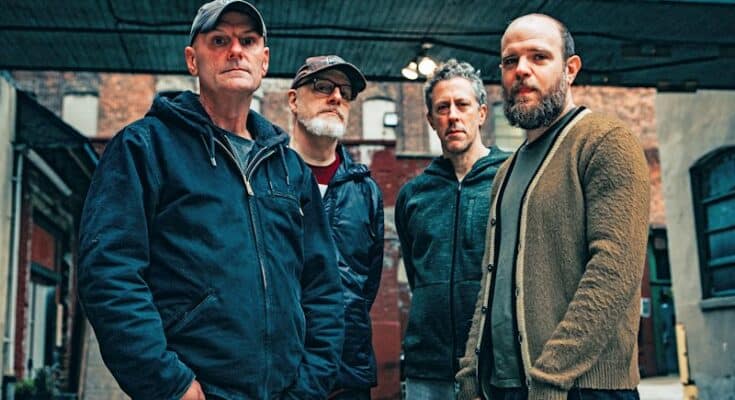 “…a heavy slice of post-punk worthy of the band’s pedigree.” – Consequence of Sound

“If you miss Unsane, this should do a good job of scratching the itch. It’s cut from the same ’90s post-hardcore/noise rock itch, and it’s a little psychedelic too.” – Brooklyn Vegan
Tour dates:

Institutions crumble under the weight of political hubris. The environment withers in the face of systemic neglect. Interpersonal relationships fall apart among divisive discourse.

However, friendship endures in spite of all that tragedy and trauma…

“It works, because of the friendship and connection,” exclaims Coleman. “The band is surprisingly free of ego. We’re all old enough that we’ve been beaten up by making music and living life in general. We’ve been through it all. So, our approach is humble. There’s room for input from everybody. It’s an organic process. At the same time, we ended up with a record that’s uncompromising and very much of the time in terms of how it sounds and addresses the world socially, politically, and emotionally.”

“Even though a lot of the subject matter could be perceived as negative, the energy is hopeful in a way,” adds Spencer. “Everything might be collapsing, but we put positivity out there.”

The seeds would be planted for Human Impact in the Lower East Side where Coleman recalls “getting in trouble together with Chris during the late eighties.” A few years later, Unsane and Cop Shoot Cop shared a rehearsal space on Avenue B. Around the same time, Coleman and Spencer commenced conversations about eventually making music together.
However, those conversations didn’t formally pick up until much later when Coleman attended an Unsane gig in the summer of 2018…

“Jim came up to me and was like, ‘Do you still have any interest in working together?’,” recalls Spencer. “I had been doing Unsane for 30 years, and I was ready to do something else in general. Jim just happened to approach me at the right time. We started writing together shortly after.”

Following two more tours with Unsane, Spencer finally focused all of his energy on what would become Human Impact. Coleman invited Puleo into the fold, and Pravdica would be the final piece of the puzzle. Throughout 2019, they recorded at BC Studios alongside studio founder Martin Bisi [Sonic Youth, John Zorn, Bootsy Collins] and at Hoboken Recorders with Spencer and Coleman at the helm as co-producers and Alan Camlet handling mixing. In August 2019, their live debut was met with fan excitement and critical praise as The New York Times claimed, “The supergroup’s lineup represents the fulfillment of a noise rock ran’s most fervent wish.”

They initially introduced Human Impact with the single “November,” which Rolling Stone declared, “When it’s done you feel as though you’ve been through a meat grinder, and in the case of a band like Human Impact, that’s a good thing.”

Meanwhile, the follow-up single “E605” hinges on an ominous bass line and airy keys as a steady beat creeps forward. Before an off-kilter riff kicks in, Spencer robotically asks, “What will you do to survive, E605?”

“I wanted an ambiguous letter and number combination to represent the internet and the overwhelming lack of privacy,” he elaborates. “It’s the idea of a greater electronic-controlled state over all of us. There are so many privacy violations these days. They’re telling us life is more convenient, but they’re keeping track of everything we do.”

Culled from the very first writing session, “Consequences” pairs eerie siren squeals and pinching guitars with a powerful refrain “about how over-population is just fucking crushing everything.” This rollercoaster ride ultimately culminates on the final hulking stomp of “This Dead Sea.”

“It’s about the massive death we’re causing in the ocean,” continues the frontman. “It’s honest about what’s happening on a very basic level.”

In the end, Human Impact also connects on the most primal, poetic, and powerful level.

“This album says, ‘Look at where we are,” Spencer leaves off. “It’s a statement. You can take it for what you personally will, but we’re simply holding up a mirror to what’s happening.”

“We get so inundated and numb from the assault of news, information, and disinformation,” concludes Coleman. “It’s like a drug that disables us. You get enraged, ask, ‘What the fuck can I do about it?’, and fall into depression. We’re making this music as a voice and face for the disenfranchisement. We want to demand some energy and hope in the midst of bleak and troubled times.” 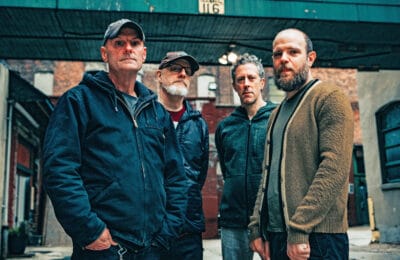 Hitting The Sidewalk, Hitting The Road, and Indie Superstar Alignment.